This is our first impressions on Hanoi and DaNang, Vietnam. We have previously visited Ho Chi Minh, Hue and Nha Trang for a few days several years ago.

Let me also state that we had mixed feelings about visiting DaNang. Prior to our visit, we read several posts on Facebook about muggings targeting visitors and expats. However, as you’ll read, these feelings quickly dissipated as we didn’t have those concerns while there.

Upon arriving at DaNang International Airport, I noticed how organized, clean and modern the airport was. It was also not overly crowded and quite peaceful (maybe it was the time of arrival at around 7pm).

We had ordered (on the advice of a friend and my research also suggested this) an airport pickup through our hotel that cost $17 USD which to me seemed quite costly for Vietnam. We chose to stay in Hoi An which is 45 minutes drive from the airport. On our way (although it was dark), we noticed all the lights, buildings and liveliness of DaNang and was pleasantly surprised.

At check-in, we thought the front desk staff were extremely friendly as they would sit and chat with you about your visit. After a few days, it seemed a little over the top (to be honest). The hotel provided shuttle service to Hoi An’s Ancient Town and while waiting in the lounge area, the front desk staff would come sit with us and chat us up. It was becoming a little too much.

Most hotels in Hoi An have bicycles available for use. Since it’s a small, quaint town we went exploring our first day on bike. We strolled through rice fields heading towards the beach. You could also bike through the Ancient Town. It was such a nice ride passing by the water buffalos and farmers at work on the rice fields. You don’t see that any day in Toronto!

When we got to the beach, our first disappointment hit us hard. The beach was horrible… to put it nicely. This is the same beach that the front desk staff kept telling us was “one of the most beautiful beach”. It made us feel sad about the present condition of the environment. There were plastic bottles, flip flops, jugs… endless garbage that washed ashore were strewn everywhere! The plastic bottles that we saw even had crustaceans growing on them which meant that they’ve been in the ocean for quite some time.

I had on my bathing suit and was looking forward to spending a few hours at the beach, we ended up leaving just after being there for about 10 minutes.

On our way back to our bikes (which we had to park in a specific area and then asked to pay for parking it there) we passed by several cafes/restaurants where vendors would constantly follow us, trying to get us to come for food and/or drinks. This was apparent in many of the areas in Vietnam.

We decided to ride back to the hotel and grab the shuttle to the famous Ancient Town instead.

I don’t normally like ‘old’ but Hoi An’s Ancient Town was beautiful with it’s well preserved French colonial buildings, quaint road ways, Japanese merchant houses and coffee shops by the river that was great for people watching. There was also the well preserved, iconic Japanese Covered Bridge with its pagoda and hanging lanterns everywhere.

We visited the Old Town both during the day and at night and felt at ease wandering the streets both times. There were endless places to see, shop and eat. However, we noticed that there were a lot of the same shops selling the same exact things. Not sure how they compete when every other store on ALL the streets have exactly the same products. Maybe that’s why they’re so aggressive with tourists (aka getting us to come into their restaurants/stores).

As mentioned, we had previously visited Vietnam and fell addictively in love with their coffee. Well, that addiction still exists. We couldn’t get enough and would have, at minimum, 2-3 cups of Vietnamese coffee a day.

We found out that they use Robusta coffee beans which is the 2nd most popular coffee (the 1st being arabica) in the world. AND Vietnam is the largest producer of Robusta coffee beans. Vietnamese coffee has a very nutty ending or aftertaste. It is also served with condense milk which cuts the bitterness from the Robusta beans with it’s sweetness. If you’re ever in Vietnam it’s a MUST try!

Each city/region has their own speciality dishes. Hoi An’s traditional foods are the Banh Bao Vac (White Rose Dumplings), Cao Lau and Banh Xeo. If you’re following us on Instagram (@TheWanderingAsianCouple), you would have seen these foods in our stories. If you’re not, then we suggest that you do so you won’t miss out!

Hoi An is known for it’s plethora of quality and affordable tailor services. And, as with all their stores, there’s a lot to choose from! They have any material you could want and can make any outfit as quickly as a day (depending on how much time you have). Ernest had a linen suit tailor made in under 24 hrs with one fitting for any changes (ie. sizing). If you want something made (well!) and to your specifications, then Hoi An is the place.

While Ernest has had suits made in Toronto and in Hong Kong (which took much longer), the style and sizing of the suit made in Hoi An was by far the best.

We were supposed to stay in DaNang for a few days, but ended up commuting to DaNang for a day. It started out with taking the local bus which costs $1.70 CAD or $1.29 USD per person. A Grab ride (ride service) would’ve been $14 CAD or $10.70 USD one way.

We were in for a surprise with the local bus. After walking approximately 30 minutes to the bus stop from our hotel, we found one bus in the whole parking lot which was basically an open area with food stalls. We noticed the color of the bus (yellow) and a sign that read “DaNang”; also the man (who was the driver of the bus) waved us in. As soon as we got on, he asked for payment and we sat down.

Now the fun starts. I’ve heard that once the bus is on the road, it’s in a bit of a “rush” and does not really stop and wait for customers to get on/off. Well, when you want to stop, you let the helper (the 2nd worker on the bus who stands by the back door and collects payment from patrons getting on) know. We noticed the bus slowing down to pickup a patron and that person jumped on without the bus making a full stop. 😐

I’m assuming that the locals know where each “bus stop” is. So when google map indicated that we were pretty close to where we wanted to go, we knew it was time to get off. I noticed a few people getting up and heading to the door. Therefore, I told Ernest that we’re following and exiting. As soon as the door opened, the people ahead of us basically jumped off. We followed suit and jumped off the bus, like locals. Once everyone who wanted to exit was off, the bus sped away without the door fully closing shut.

DaNang is apparently the 5th largest city in Vietnam in terms of urbanization and economy. I’ve also read that there is also a large amount of expats living in DaNang. It’s especially known for it’s proximity to “some of the most beautiful” beaches (My Khe Beach). This is what I was most excited about; the beach is my serenity. Well, we were once again disappointed. Unfortunately, we’ve seen much better beaches just 5 hours away in the Caribbean.

The city is also in a construction boom, so there are tall high rises (ie. apartments, hotels) going up everywhere. However, the areas that were recently built appeared to not have been maintained well. Therefore, sidewalks were broken and falling apart; buildings looked old although they were recently built.

Too many high hopes, too many disappointments.”

Overall, we were happy to have returned for a visit to Vietnam. We enjoyed strolling through Hoi An’s rice fields and Ancient Town. The food, no matter where and what the local cuisine in Vietnam, is one of our favorites. From a simple Banh Mi sandwich to a little more complex Cao Lau noodle dish, we loved every bite. We will never forget how good Vietnamese coffee is and will definitely remember the unique taste.

If you’ve never been, we highly suggest visiting Vietnam. 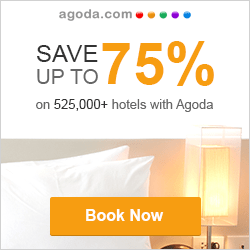